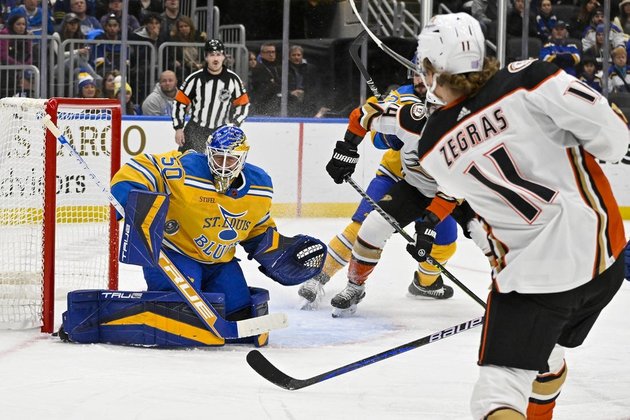 Noel Acciari scored twice for the Blues, including an empty-netter, and goaltender Jordan Binnington made 27 saves.

Cam Fowler scored, and John Gibson made 24 saves for the Ducks, who lost for the sixth time in seven games.

The Blues scored just 11 seconds into the game when Ivan Barbashev dumped the puck into Anaheim's zone, Brayden Schenn stole the puck from Ducks defenseman Fowler on the forecheck and fed Acciari for his clean break-in.

Colton Parayko nearly scored on the next Blues shift on a two-on-one break, but his shot rolled wide after bleeding through Gibson.

The Ducks controlled the rest of the period while outshooting the Blues 15-9. They finally tied the game 1-1 with 17.5 seconds left with a lucky carom.

Isac Lundestrom circled the back of the net and put a shot on goal from the right circle. The weak-side rebound went to Fowler at the left point and he shot wide, but the puck bounced off the knee of Blues defenseman Nick Leddy and into the net.

The Blues got a golden power-play scoring opportunity in the first minute of the second period. Jordan Kyrou broke in alone, but Gibson stayed with his double move and made the save.

With just over seven minutes left in the period, the Blues nearly converted a goalmouth scramble. With Barbashev and Schenn whacking away at the puck in the crease, it slipped through Gibson and just short of the goal line before the Ducks swept it away.

Pavel Buchnevich had a short-handed breakaway for the Blues in the third period, but he lost control of the puck as he broke in alone on Gibson.

Out to match a season-best winning streak, the New York Rangers will continue their Southern California double with a visit ...

The Utah Jazz front-office's decision to trade All-Stars Donovan Mitchell and Rudy Gobert in exchange for a boatload of first-round ...

Kabul [Afghanistan], November 23 (ANI): An earthquake of magnitude 4.3 on the Richter scale jolted Afghanistan on Wednesday, the National ...

Gazan fruit farmers losing out amid competition from Israeli produce

© Provided by Xinhua Despite having a bumper harvest, Gazan fruit farmers, facing competition from cheaper Israeli produce, see only ...

Chris Kreider scored two third-period goals for the visiting New York Rangers in a 5-3 win against the Los Angeles ...

News of yet another deadly shooting at a United States LGBTIQ+ nightclub has again brought hate crime to the forefront ...

King could step in if Malaysia parliament cannot choose leader

KUALA LUMPUR, Malaysia: As support for a conservative Islamic alliance prevented major coalitions from winning a simple majority in its ...

BUFFALO, New York: Just ahead of the busy Thanksgiving holiday week, western New York state was hit by a snowstorm, ...

After 73 years, Biden tells Palestinians to wait until conditions are right

NEW YORK CITY: Granting Palestine full state membership status at the UN would be a "practical" step that could preserve ...

WASHINGTON D.C.: In the largest dam removal undertaking in U.S. history, a U.S. agency last week approved the decommissioning of ...

The Trial of the Chicago 7

Trial of the Chicago 7