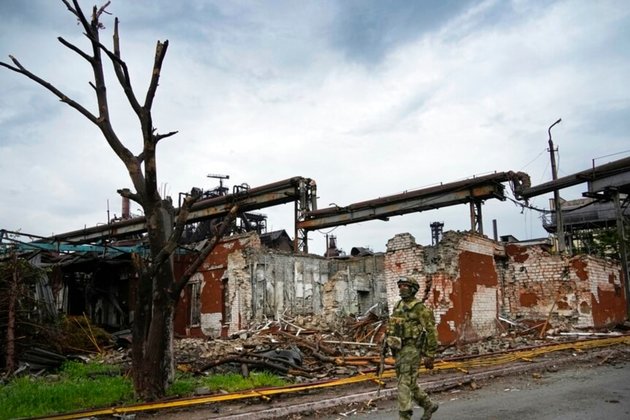 The International Committee of the Red Cross said in a statement it was registering fighters who left Azovstal, an operation that began Tuesday and was continuing Thursday.

"The ICRC is not transporting POWs to the places where they are held," the aid group said. "The registration process that the ICRC facilitated involves the individual filling out a form with personal details like name, date of birth and closest relative. This information allows the ICRC to track those who have been captured and help them keep in touch with their families."

Ukrainian officials have not confirmed the Russian account of the number of Ukrainian fighters who have surrendered at the last holdout in Mariupol. Ukraine has expressed hopes that the soldiers can be part of a prisoner swap with Russia, while Russia's main investigative body said it intends to interrogate them and determine if any were involved in crimes against civilians.

The capture of Mariupol, a prewar city of 430,000 people along the north coast of the Sea of Azov, would be Moscow's biggest success in its nearly three-month offensive against Ukraine.

With Russian forces focusing efforts on the eastern Donbas region, Mykhailo Podolyak, an adviser to President Volodymyr Zelenskyy who was involved in several rounds of talks with Russia, said Thursday that agreeing to a cease-fire with Russia "is impossible without total Russian troops withdrawal.'

"Until Russia is ready to fully liberate occupied territories, our negotiating team is weapons, sanctions and money," Podolyak said in a Twitter post.

A senior U.S. Defense Department official said Wednesday that Russia is making some 'incremental progress in the direction of the Black Sea" near Kherson and Mikolayiv, as well as in Donetsk.

The official said that Russian logistical issues remain: "They have not corrected their coordination issues. ... Their communications are still not very efficient between commanders."

Ukraine on Thursday also welcomed the confirmation of a new U.S. ambassador. The U.S. Senate gave its approval to Bridget Brink, a veteran foreign service officer who had been the U.S. ambassador to Slovakia.

The ambassador post in Ukraine had been vacant since 2019 when then-President Donald Trump forced out Ambassador Marie Yovanovitch.

Brink's confirmation came as the United States also resumed operations at its embassy in Kyiv, joining other nations that have returned since Russian forces withdrew from the area around the Ukrainian capital.

Some information for this story came from The Associated Press, Agence France-Presse and Reuters.