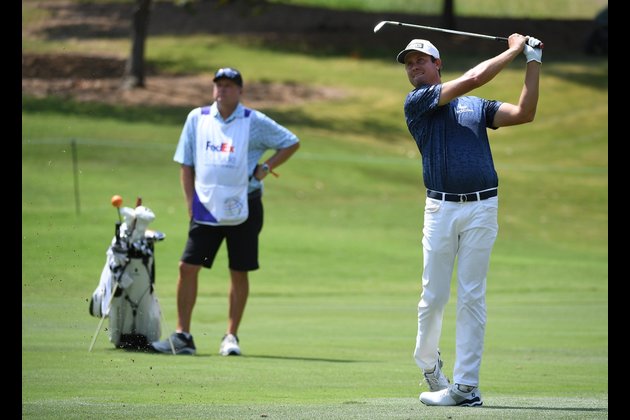 Harris English rolled in 10 birdies and matched a career-best round of 62 Thursday to take the first-round lead at the WGC-FedEx St. Jude Invitational in Memphis, Tenn.

Already a two-time winner on tour this season, English opened his tournament with four straight birdies and made the turn in a 7-under 28, tying TPC Southwind's nine-hole record. He stumbled with two bogeys over the next three holes before a strong finish to reach 62.

English, 32, said the thought of shooting 59 never entered his mind.

"I'm just trying to stick to my strategy every hole," he said. "I didn't get too far ahead of myself because I know this course can come up and bite you at any moment. You start hitting in the rough, you start missing greens, it can get tough. I was just happy with the way I fought back. Had two bogeys on 10 and 12, but climbed back in it, and birdieing the last three out of four is a great way of finishing it off."

English won the Sentry Tournament of Champions in January and the Travelers Championship in June, where he outlasted Kramer Hickok in an eight-hole playoff. No player has won three events yet this season. English has risen from No. 28 in the Official World Golf Rankings at the end of 2020 to as high as No. 10 and is currently 14th.

Ortiz made a quick turnaround from competing in the Tokyo Olympics last week, where he was tied for third after three rounds before dropping off with a final-round 78.

Thursday's bogey-free 64 was a nice rebound for Ortiz.

"I felt like I put myself in contention for three days and that's huge -- pretty much for the whole tournament," Ortiz said. "You can put yourself in contention one day or the first day, but when you're pretty much the whole tournament, you have to be playing well and that gives me a lot of confidence. I feel that my game is in good position right now."

DeChambeau is playing his first tournament since contracting COVID-19, which forced him to miss the Olympics. Since his last win on tour at the Arnold Palmer Invitational in March, the world No. 7 has received criticism for everything from his feud with Brooks Koepka, to blaming his equipment sponsor for driving woes at the Open Championship, to declining the coronavirus vaccine.

The long driver made two of his six birdies Thursday by planting approach shots within four feet of the pin.

"Made some birdies, which is nice," DeChambeau said. "It's a tough golf course for me with the way I play, so very excited for that."

Only 66 players are competing at the event due to its invitational status. Only 12 of them shot over par in the first round, one of them being Northern Ireland's Rory McIlroy, who sits in 62nd place after a 2-over 72.