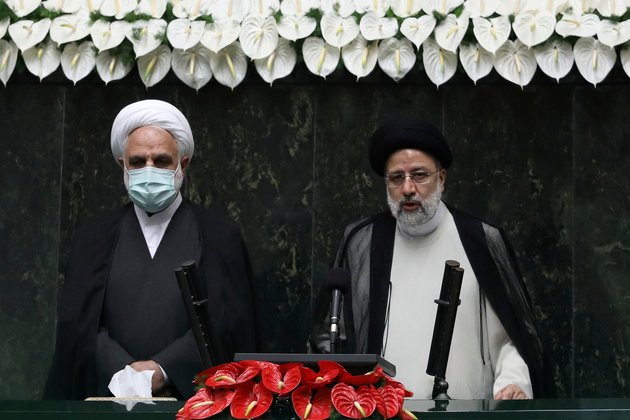 Ebrahim Raisi was sworn in Thursday as Iran's new president.

The ultraconservative former judge won a landslide election in June in a vote that drew record-low turnout. A number of prominent candidates had been disqualified from running.

"I swear to safeguard the official religion and the establishment of the Islamic Republic and constitution of the nation," Raisi said during the oath ceremony.

Raisi takes office at a time when Iran faces big economic challenges, including the effects of U.S. sanctions.

Raisi said in a speech Tuesday he would seek to "lift the tyrannical sanctions imposed by America," and he would not tie the country's economy "to the will of foreigners."

The United States imposed sanctions beginning in 2018, as it withdrew from the international agreement to limit Iran's nuclear program in exchange for sanctions relief.

The two sides have held indirect talks about returning to compliance with the new agreement.

Iran also is being hit hard by the coronavirus pandemic, reporting record numbers of new cases this week.

Raisi was appointed to head Iran's judiciary in 2019. In November of that year, the United States placed him under sanctions for his involvement in the 1988 executions of thousands of political prisoners.

Some information for this report came from the Associated Press, Agence France-Presse and Reuters