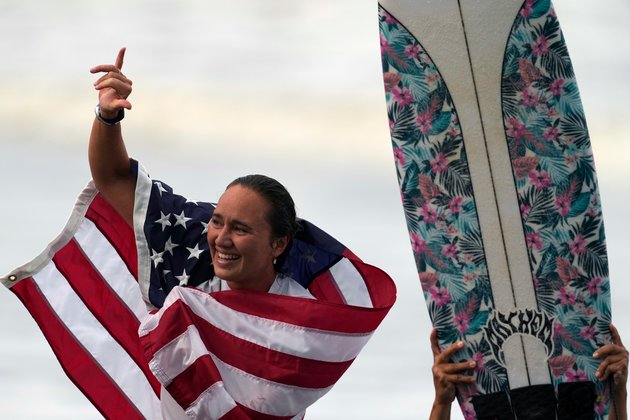 Carissa Moore wore a white and yellow plumeria pinned next to her ear for her victory-lap interviews after making history as the first Olympic gold medalist at surfing's historic debut.

Her mother - crowned the Honolulu Lei Queen in 2016 - had given her the flower hair clip before she left for Tokyo to remind the only Native Hawaiian Olympic surfer of where she came from.

At this pinnacle point, Moore is still in disbelief when she's compared to Duke Kahanamoku, the godfather of modern surfing who is memorialized in Hawaii with a cherished monument.

"I don't think I'll have a statue," Moore said, grinning from ear to ear while her body bobbed into a quiet giggle at the suggestion. "Gosh, there's only a few people in Hawaii that I think deserve that."

As celebrated at home as she is loved by fans and peers around the world, it was a characteristically modest statement from one of the world's greatest surfers after she took home gold in the sport's inaugural Olympic competition.

The methodical Moore found her rhythm with the ocean to deliver the kind of standout, power-surfing performance that has defined her career. The picture-perfect ending even included a rainbow that popped into the sky as she shredded waves in the final against South African rival Bianca Buitendag.

Moore has now become a realization of Kahanamoku's dream, at once the symbol of the sport's very best and a validating force for an Indigenous community that still struggles with its complex history.

"It's a reclaiming of that sport for our native community," said Kūhiō Lewis, president of the Council for Native Hawaiian Advancement, which convenes the largest annual gathering of Native Hawaiians.

Lewis said all the locals he knew were texting each other during the competition, glued to the TV and elated, even relieved, by Moore's "surreal" win. He called it a "come to home moment" for a community that may never reconcile its dispossession.

FILE - Carissa Moore competes during the gold medal heat in the women's surfing competition at the 2020 Summer Olympics at Tsurigasaki beach in Ichinomiya, Japan, July 27, 2021. Moore is the only Native Hawaiian surfer at the Games.

After centuries of colonization by various European settlers, Hawaii was annexed by the United States in 1898 after the overthrow of the Hawaiian monarchy by U.S.-backed forces in 1893.

"At times, we're an invisible people. We're lumped in to other ethnic groups. Our sport is being defined by other groups. This puts it into perspective," Lewis said. "It feels like an emerging of a people, of a native community that has been invisible to many."

All eyes were on Moore when the Tokyo Games began, not only because she was the medal favorite as the reigning world champion but also because she was competing for the United States. Until then, Moore had always surfed for Hawaii in the professional World Surf League, which recognizes it as a "sovereign surfing nation."

Moore is biracial and grew up in the only majority Asian American and Pacific Islander state in the United States. Her white father, of Irish and German ancestry, taught her how to surf. Her mother is ethnically Native Hawaiian and Filipino and was adopted and raised in a Chinese-American family.

"I'm proud to be representing the USA, but specifically the islands of Hawaii because there are just so many different kinds of people there, and I feel like such a connection to all of them," Moore said. "And I wouldn't be where I am today without the community of people that have really raised me."

U.S. Senator Brian Schatz of Hawaii this week honored both Moore and Kahanamoku on the Senate floor.

"There's a saying that the best surfer is the person having the most fun and that's unquestionably the case with Carissa," Schatz said. "She's an intense competitor who wants to win every event she enters, but also one who wants to see her opponents - and more importantly the sport of surfing itself - succeed."

Kahanamoku was among the first athletes to break sports' color barrier as an Olympic swimmer who medaled five times. It was at the 1912 Summer Games in Stockholm that he first pushed the International Olympic Committee to include surfing, though it was virtually unknown outside of his native Hawaii back then.

Hawaii's most famous son then dedicated his life to promoting surfing and his homeland, famously introducing the sport via exhibitions in places from California to New Jersey, Australia and Europe. Kahanamoku was the ultimate waterman: His legacy includes popularizing flutter swimming kicks and spreading the concept of lifeguarding and water rescue to the masses. On top of that, he dabbled in Hollywood movies and served as Honolulu's sheriff.

A century later, Moore was plenty accomplished in the sport before her Olympic Games. She became the youngest ever champion at age 18, and today has four world titles in addition to being the first Olympic gold medalist in her sport. She's also recruiting young girls to take up a sport that once very much prioritized men, and has spoken publicly about her struggles with body image and disordered eating as a teenager.

With this new global platform, Moore says she is proud of what she represents and wants to spread positivity as her idol did.

"This was his dream to have surfing in the Olympics," Moore said. "I hope I made him and my people proud."